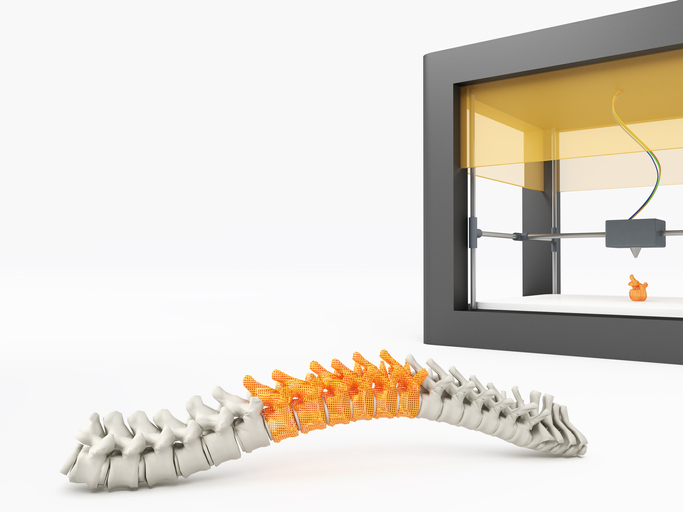 Back in the 1970s, there was a television show called “The Six-Million-Dollar Man” about a fictional astronaut severely injured in a test crash, and then having several body parts replaced by robotics. The show’s opening narration promised that he would be “better than he was before. Better. Faster. Stronger.”

Life is now imitating art, and then some. 3D printers are currently being used to construct not only customized prosthetics for patients in need, but a wide variety of other medical items — foremost among them tissues and organoids, as well as surgical models and tools. It is estimated that 13 percent of 3D printing revenue comes courtesy of the medical field, and that some $3.19 billion will be spent on technology in that sector by 2025. That’s over $2 billion more than in 2018 ($1.13 billion), a compound annual growth rate (CAGR) of 15.89 percent.

There are many reasons for this uptick, not the least of which are that these items can be produced quickly and inexpensively. But there is none bigger than the ever-increasing demand for prosthetics. Some 30 million people around the world, including 1.9 million in the U.S., are in need of such devices, and as of 2018 only 20 percent of them had been provided for.

Factor in other devices and “an aging population with a consequent increase in demand for personalized treatment” — as noted by Tim Deng, Principal Medical Devices Analyst at GlobalData, in a report on the website Express Healthcare — and the overwhelming need becomes that much clearer.

So too are the benefits of meeting that need. Better, faster, stronger? Well, that part might be a bit of a stretch, at least for now. But certainly it appears that 3D printers are making it possible for patients to be as good, as fast and as strong as they were before illness or injury left them a shell of their former selves.

Serendipity helped galvanize the 3D prosthetics industry. In 2011 an artist named Ivan Owen developed a puppet hand for a steampunk event — i.e., an event where modern technology melds with elements of Victorian-era history and fashion. He circulated a video of his creation, which was seen by Richard Van As, a South African carpenter who, having just lost four fingers in an accident, was looking for a prosthetic hand that would enable him to return to work. The two of them collaborated to construct just such a device, then used a 3D printer to develop another for a five-year-old boy who was born without fingers.

Owen, instead of patenting his invention, elected to open-source it. That led in 2013 to the formation of the nonprofit organization e-NABLE, an online community enabling people to collaborate on the design of 3D prosthetic limbs. Another nonprofit, Limbitless Solutions, came along a year later, with the mission of providing 3D-printed arms for children.

Then there is the startup Unlimited Tomorrow. In 2020, some six years after its founding, the Rhinebeck, N.Y.-based company also rolled out a prosthetic arm courtesy of a 3D printer, while emphasizing its affordability (“as low as $7,995.”) compared to prosthetics produced by other means (over $50,000).

3D printers are getting ever closer to being able to produce organs, and progress is being made on other fronts as well. In 2018, researchers at the University of Utah became the first to produce ligaments and tendons in that fashion, by extracting stem cells from a patient’s body fat, printing them onto a layer of hydrogel, allowing time for the cells to form the required connective tissue outside the body and then implanting it where needed.

This is a particularly important breakthrough, since injuries to tendons and ligaments had in the past proven to be difficult to treat. Most commonly, tissue from cadavers was used, but there was the risk of rejection, or that the connective tissue wouldn’t perform as expected.

In 2019, there was another promising development when a team at Rice University made promising strides toward producing cardiovascular networks and lung-like air sacs through the use of bioprinting technology called “stereolithography apparatus for tissue engineering,” or SLATE. The team hopes to commercialize that technology in the future, which could have obvious benefits for those suffering from heart or lung disease.

Truly there seem to be no bounds to what 3D printers might mean for healthcare. The possibility exists of dental professionals using the technology to create customized dental implants, prosthetics and braces — that printing could be done in-office without long wait times. Once the patient’s teeth have been scanned, their dental treatment will be printed in-office. This allows for a better fit and even time for immediate troubleshooting. Compared to taking a mold and relying on an outside source, this is more convenient for both patients and professionals.

On the other side of the equation, a 3D printer can be used to create customized instruments for use in complex surgeries — and the process can be done far more quickly than is the case by other means. It is also possible to create three-dimensional models of patients’ internal systems before surgical procedures, giving doctors a clear understanding of the challenges they face.

Also of interest is the production of customized medication via 3D printer, a process begun in 2015 to counter the trend toward producing dosages best-suited for white adult men, meaning women and children were receiving more than was necessary. Customizing the dosage, Multiply Labs CEO Fred Paretti told the website 3D Natives, goes a long way toward “highlighting the individuality of each patient, since the error in dosage of certain active ingredients can even lead to the malfunctioning of some treatments.”

The bottom line is that 3D printers will be making an even greater impact on the medical field in the years ahead, as evidenced by the fact that the number of U.S. hospitals featuring the technology grew from three in 2010 to over 100 in 2019. The need is there, and the evolution will certainly only continue. And someday, maybe there really will be a Six-Million-Dollar Man.