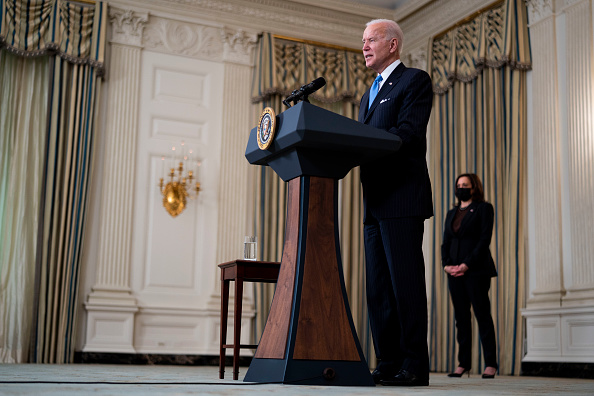 Merck will shoulder some of the manufacturing work for Johnson & Johnson’s Covid-19 vaccine, an alliance President Biden brokered under a federal law that gives him the authority to secure production of critical products during national emergencies.

With the additional manufacturing capacity from Merck, President Biden said that J&J’s plan to deliver 100 million doses of its vaccine by mid-year will be accelerated by a month.

“We’re now on track to have enough vaccine supply for every adult in America by the end of May,” Biden said in a White House address Tuesday afternoon.

The Department of Health and Human Services and Merck are working together to convert some of the Kenilworth, New Jersey-based pharmaceutical giant’s sites for the rapid and large-scale manufacturing of vaccines and therapeutics for the pandemic. Those sites will become available for companies working with the federal government on Covid response.

J&J is the first company that will join this initiative as a federal partner, according to HHS. Merck will use two of its facilities to produce ingredients for the J&J vaccine, which received FDA emergency authorization last Saturday. Merck will also use its sites to formulate and fill vials with the vaccine. The agency added that in the long term, these steps will double J&J’s U.S. capacity for producing drug substance for the vaccines and increase the company’s fill-finish capacity.

The measures announced Tuesday were coordinated under the Defense Production Act (DPA), a Cold War-era law signed in 1950 and amended and expanded over the years beyond its military origins. The law gives the president the authority to force businesses to prioritize contracts for goods deemed “critical and strategic.”

The law was used in 2001 by President Bill Clinton and then President George W. Bush to address an energy crisis in California, according to PolitiFact. President Bush also invoked it during the Iraq War.

Former President Trump used the DPA, but he did not exercise the law’s full power to direct companies to produce critical goods. In the early days of the pandemic, he signed an executive order that invoked DPA to force companies to first sell medical supplies to the federal government before selling them to hospitals, states, and other countries. He also used it last August to secure large-volume purchases of Covid diagnostics systems and tests for shipment to nursing homes.

The DPA includes a section that allows the president to incentivize businesses to expand their production of critical goods. Merck is getting an incentive in the form of funding from the Biomedical Advanced Research and Development Authority (BARDA). HHS said BARDA is providing Merck with an initial $105 million to convert and adapt the company’s facilities so that they can manufacture the J&J vaccine. Merck said that the funding available to the company could reach $268.8 million.

In addition to invoking DPA to boost vaccine production, Biden said he used the law to also speed up the production of other items important for making these vaccines including equipment, machinery, and supplies such as single-use bags. He added that J&J will begin operating its vaccine manufacturing facilities 24 hours a day, seven days a week.