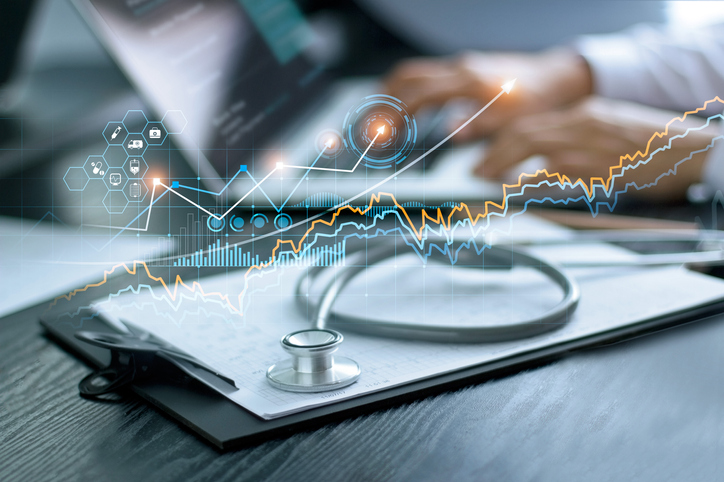 On Monday, Abbott announced the launch of its FDA-approved NeuroSphere Virtual Clinic by which patients implanted with the company’s deep brain stimulation devices for Parkinson’s Disease, essential tremor and chronic pain can have their devices programmed remotely without having to travel to a specialist.

Hailing this virtual capability, the Abbott Park, Illinois company described it as a “first of its kind” remote neuromodulation care for patients.  Other players in the world of Deep Brain Stimulation (DBS) are Medtronic and Boston Scientific.

DBS falls within the broader umbrella of neuromodulation by which mild electric pulses are used to stimulate certain nerves to achieve therapeutic ends. Neuromodulation can be delivered using both external or implanted pulse generators. DBS requires a pulse generator to be implanted such that nerve centers in the brain receive low-intensity electrical pulses to control things like movement disorders and chronic pain. That is achieved using different combinations of amplitude, pulse width, and frequency.

After a patient is implanted with the device, a specialist has to program the device to determine what the optimal therapy is by fine-tuning the amplitude, pulse-width and frequency. Just like physicians need to titrate medications to achieve the optimal dosage for the individual patient, specialists need to alter the settings on the implanted device a few times to determine optimal therapy. But in the world of DBS, this is easier said than done.

Most DBS patients for Parkinson’s Disease are already taking an established drug called Levodopa to control their systems and before travel to the specialist to adjust settings on the DBS system need to be off of their medications overnight, explained Keith Boettiger, president of Abbott’s Neuromodulation business in a phone interview before the FDA approval. This means that they would need to be in some discomfort as they traveled — an average of 150 miles per Abbott’s estimation — to see the specialist for a reset of the device. Now with the device being able to programmed at home, much of the inconvenience and discomfort is alleviated. 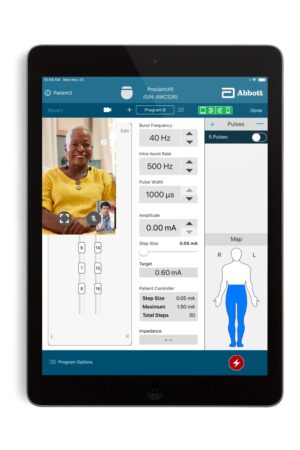 Through a video session, a specialist can access the patient’s device settings and alter them to achieve optimal therapy for DBS patients

The virtualization of the programming is especially key in this field, he said, because there aren’t a plethora of movement disorder specialists around the world. So many patients struggle through less-than-optimum therapy settings because they balk at the prospect of having to travel so much to get the device reprogrammed.

“A lot of them have to travel hundreds of thousands of miles to get the therapy so it decreases the chance to optimize their therapy if they already have a device and secondly, it reduces the access to care that patients could benefit from the device but they can’t get on a plane and fly from Montana to UCSF every time they need to be programmed,” he said using a hypothetical example.

The approval and launch of the NeuroSphere Virtual Clinic follow a trajectory of increased digitization for both the DBS device itself and the healthcare industry as a whole. Before this, Abbott patients using a mobile patient controller app could turn and turn off the therapy and make small adjustments to change therapy depending on their quality of life, Boettiger said. However, with this new advancement, neurologists can change settings in the way they would were the patient in front of them in the clinic.

However, it goes without saying that this virtual ability to communicate with the specialist and have the device reprogrammed depends on something that Abbott doesn’t control: broadband capacity in the patient’s home. And Boettiger acknowledged as much though he argued that the device was still a boon for a rural patient in Montana who instead of having to travel to San Francisco to UCSF could drive to Missoula instead and communicate with the physician at UCSF.

The technology, he believes, will drive both replacements — when a battery change is required, a new stimulator must be implanted — and bring in new patients into the world of DBS.

“DBS is a $700M business worldwide and about half is replacement and de novo implants are half of that. It’s less than 1% penetrated for Parkinsons for getting DBS and there are three comapnies in this space and one company has been at this for 25 years at this market and it grows in replacements and not de novos,” he said taking a dig at Medtronic. “And we must grow the de novos to  have a healthy market.”

Boettiger believes that having this convenience will drive more patients to seek DBS therapy for the first time (hence, de novo) and Abbott will be responsible for increasing the pie or the total addressable market. He declined to say how much Abbott’s DBS devices cost and how the addition of this new technology will affect pricing, only that it is currently reimbursed under Medicare’s current telemedicine reimbursement rules.

Dollars and cents aside, Abbott’s technology is being launched at a time when telemedicine and home health have catapulted to the forefront of patient care. And this virtual capability will change how patients think of DBS therapy, Boettiger contends.

“I think patients are going to be more apt to have their therapy optimized because … they don’t have to get in a car and have to travel to their physician’s office. That’s an inconvenience, Boettiger said.

In other words, the dynamic of patient thinking “do I really want to go through the rigmarole of going to my physician’s office for a small optimization” may be forever changed.